Do you know the Difference between Neon and LED? 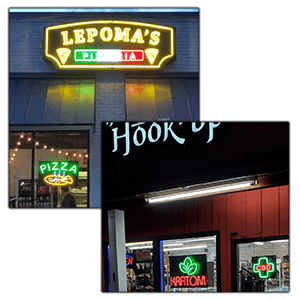 Neon and LED lighting both have multiple applications, but it is important to distinguish the vast differences between the two types of lighting.  The industry is full of misinformation regarding Neon and LED lighting.  For example, some LEDs are marketed as “New Neon,” “Flex Neon,” or “LED Neon.”  This can fool buyers into believing they are getting a genuine neon sign at an extremely low price.  While there are many forms of LED, there is only one true Neon.  We would like to give you information about both products so that you, the buyer, can make an informed decision.

“Neon” is an inert gas present in the atmosphere.  It was discovered by William Ramsay and Morris W. Travers in 1898. The first commercial neon sign in the United States was made for a Packard dealership in 1923.  Neon signs quickly became the predominant form of lighted advertising and have been for over 100 years.  Many products claim that they can replicate, replace, or even outshine neon, but the characteristic glow of true neon can never be duplicated.  Neon has a unique and unmatched look, longevity, and history.

The commercial LED was invented in 1962 by Nick Holonyak Jr. while under the General Electric Company. At their birth, LEDs were only available in red and orange.  The wide range of colors in LED lights we see today is a new concept.  LEDs are now part of a boundless market that caters to products ranging from children’s toys to advanced electronics.  They are also used to replace other forms of lighting such as incandescent and fluorescent bulbs.

The primary distinction between Neon and LED lights is how the two are manufactured.  Real neon is art. It starts as a straight stick of glass, is heated and hand bent over a fire, then filled with real neon or argon gas.  The color of neon art is determined by a combination of the type of gas the glass is filled with and the phosphor coating inside the glass.  This hand-bent glass tubing produces smooth lines of light that are pleasing to the eye and easy to read.

LEDs are made of very thin layers of semiconductor material; one layer has an excess of electrons, while the next has a deficit of electrons.  The semiconductors used for the manufacturing of LEDs are gallium arsenide, gallium phosphide, or gallium arsenide phosphide.  To complete the device, wires are added and heated to create a bond.  LEDs are laden with lead, arsenic, and a handful of other chemicals that have been linked to different cancers, neurological damage, kidney disease, hypertension, skin rashes, and other serious illnesses.  The semiconductors are then encased in transparent plastic.  Light from LEDs can damage the eyes and could cause blindness if the wrong plastic is used.  Additionally, LED signs consist of tiny dots of light that often look clunky and are hard to read. 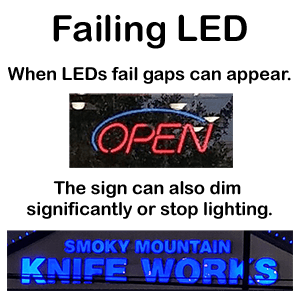 Neon signs last decades with no maintenance.  On the off chance that a neon sign does stop working, the most common issue is that the power supply failed.  These are inexpensive and easily replaced.  Further, if a piece of glass is broken, the broken section can simply be replaced.  There is no need to buy a new sign.

The most common issue with LEDs is that individual diodes fail. This results in “gaps” of light.  Because of the way LEDs are manufactured, these diodes are usually encased in another material and cannot be repaired or replaced. Because of this, LED signs are “disposable” signs.  Once one thing fails, the entire sign must be thrown away.

While the initial cost of Neon is higher than LED alternatives, Neon comes with a guarantee of longevity and style.  Neon tubing lasts forever. Neon power supply units, the most likely thing to fail on a neon sign, last an average of 60,000 hours and can easily be replaced.  A high-end LED sign can last a maximum of 40,000 hours (just over 4 years) before it must be replaced.  A true neon sign is a classic investment; one that will last forever.